I’ve been meaning to give wet set curls a try for quite a while. This is how they did things in the olden days and it is a mainstay of vintage hairstyling. When I was little I had extremely long hair. Sometimes when I would sleep over at my grandma and grandpa’s house, my grandma would wet set my hair with rags. It was always fun and lasted longer than anything from a curling iron — although it still didn’t last very long on a zany little girl. 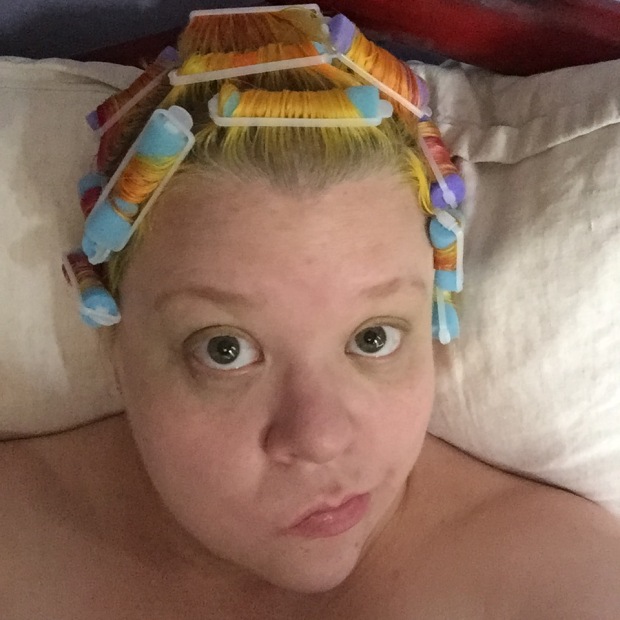 I towel dried my hair and prepped it with some styling cream. I bought a multi-size pack of foam rollers from amazon. I only used the smallest and 2nd smallest rollers.  Since I was taking a nap and also since I ran out of the smallest rollers, most of the bottom back was unrolled. I did find it a little hard to sleep despite how much I needed a nap because I rolled some of my hair a little too tight. This set was very fast. I only left it for about three hours. My hair is very fine so it was mostly, but not completely dry. 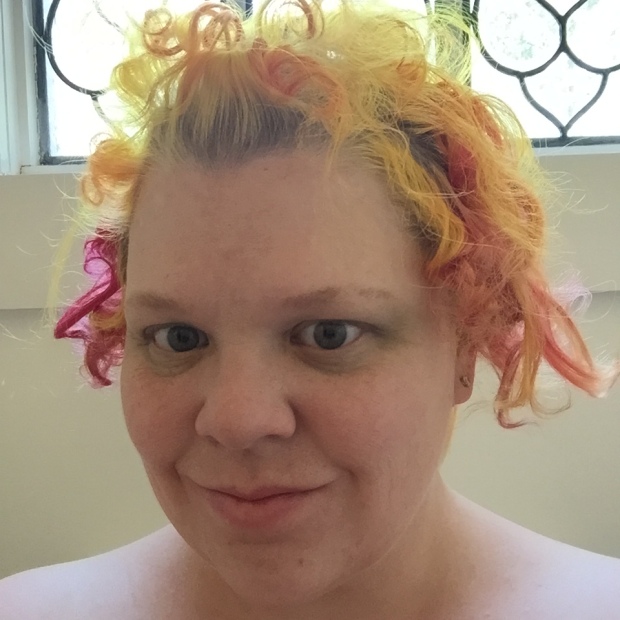 I had a somewhat hard time getting some of the rollers out. The ends got a little tangled. This might not have happened if my hair would have been absolutely dry. I got some crazy kinky curls though!

The secret to the wet set seems to be the brush out. Apparently a boar’s bristle brush is the way to go. At the moment, I don’t have one (but I think that will be changing) so I used my Denman paddle brush and Denman curved styling brush. I had a really hard time fighting my hair into a reasonable shape. I’m sure this was partially due to the fact that I didn’t really roll my hair in a particular pattern or pay close enough attention to which direction the curls were going. I had to touch up the back and some of the curl ends with a curling iron. 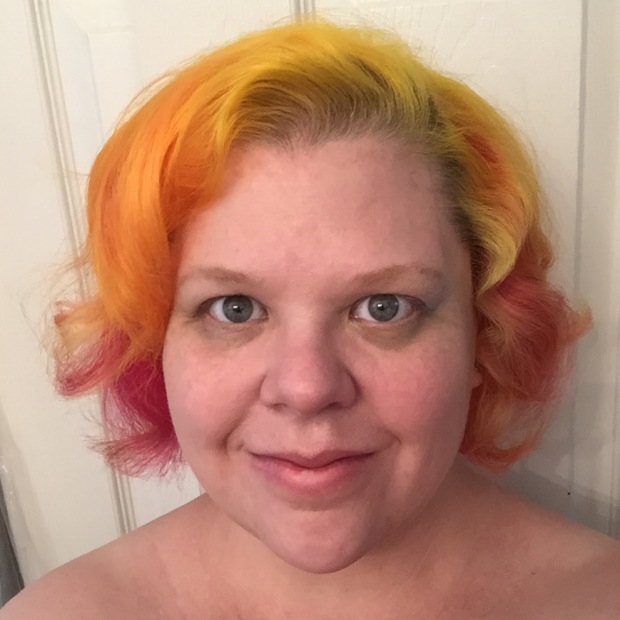 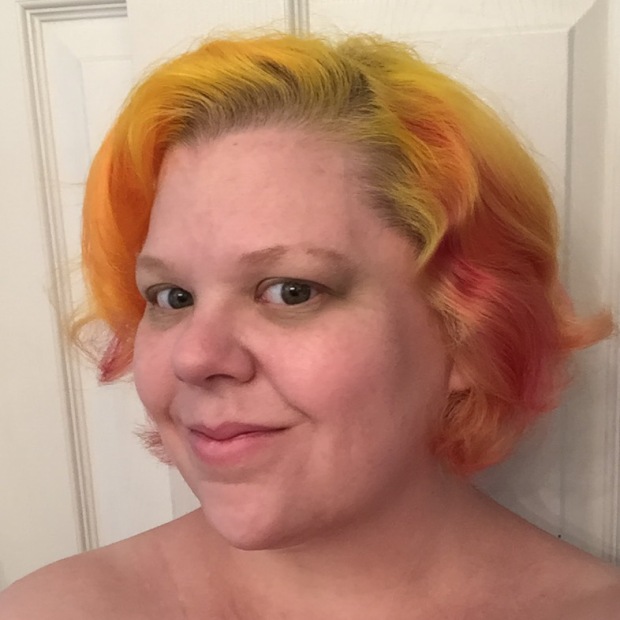 Eventually I got something that I was fairly pleased with. It was definitely a lot fluffier than I would have preferred. It certainly looked retro however.

I went out with a friend for an evening of cute dresses, tiki drinks and pokemon hunting. I finally wore my Atomic dress. I had very mixed feelings about this dress when I was sewing it but I love it now! 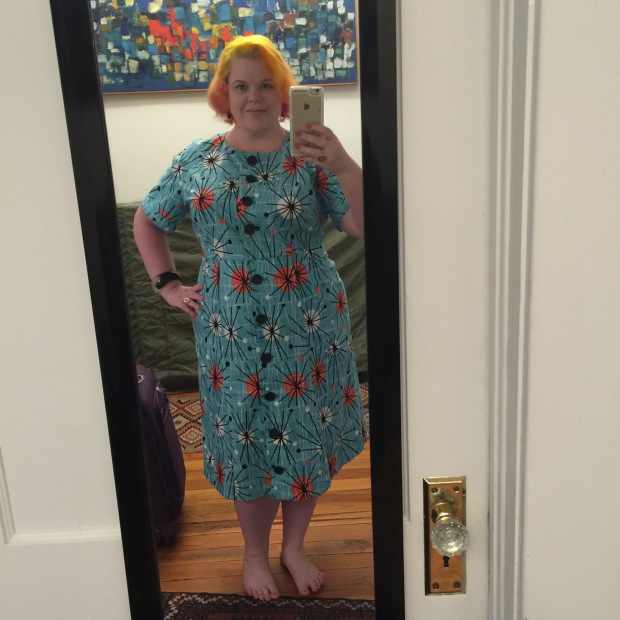 Even in my dress selfie you can see where ironed curls were already failing before I even left the house. My hair sort of held up for maybe half the night. The curls were gone but I was left with a fair amount of fluff and volume that stuck around into the next day.

I can’t really say that this was a success but I think I learned some things in my experiment. For one thing, I shouldn’t use the smallest rollers right at the hairline. The curls come out too small, kinky and unmanageable. I also probably need to buy that boar’s bristle brush. Finally, I might have better results after a much longer drying time.

Later this week I’ll try this again. On the next attempt I’m going to attempt to create something more Regency since I have two Regency dress to wear at Costume College. Wish me luck!

Continuing on through my vintage pledge goals I have finally reached a favorite time period for music and fashion, the early 80s. Bowie was still going strong, Duran Duran was just beginning and I was just barely starting to become aware of the radio. It doesn’t seem like 1981 would be vintage but that was 35 years ago. Yikes. 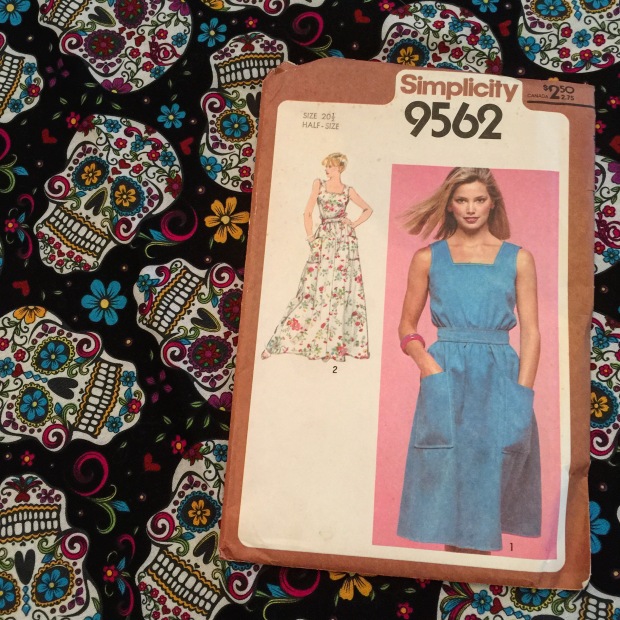 I love maxi dresses. Being short, I can rarely find them off the rack. Simplicity 9562 has a short view and a maxi view. It can look totally 80s or timeless depending on fabric and accessorizing. It also has nice big patch pockets. I was pretty stoked to make this one!

Since I was attending an “undead” luau I thought that some sugar skull fabric from my stash would be perfect to use. I again used pretty much all of the fabric and only had scraps left. I kind of love when that happens as I really have no idea what to do with fat quarters and such. I’ve been saving my decent sized scraps to give to a friend’s daughter. I’m glad they have a good home that isn’t mine. 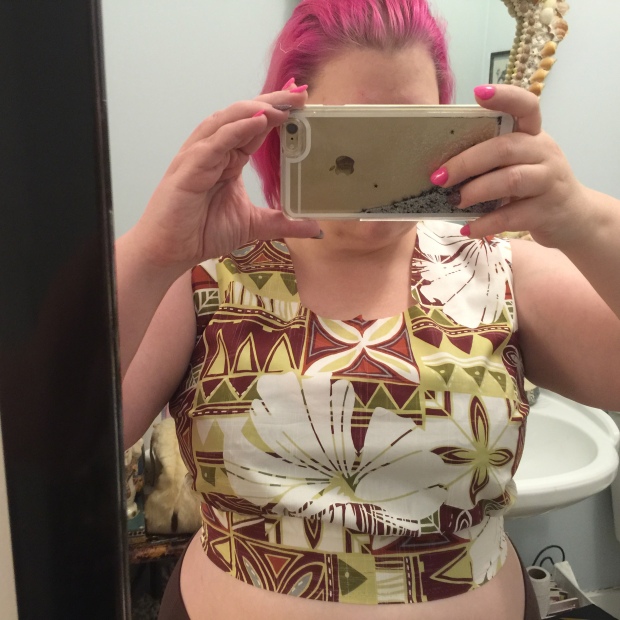 My mock up was pretty spot on. I thought it was just a touch tight though so I just cut more generously. As it turns out, I maybe didn’t need to do that. The cotton I used for the mockup was left over from my uncle’s tiki shirt. It doesn’t have much give or softness which may have made the mockup seem somewhat tight. It’s not like adding a little extra “hurt” anything though. 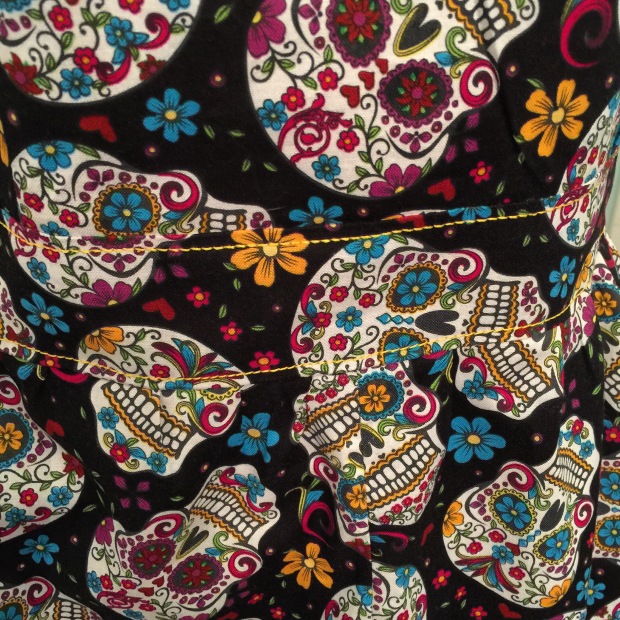 I decided to use actual topstitching thread to do the topstitching details. With the large and busy motifs, I didn’t think anything else would really show up. Some of the top stitching turned out really great but some was a bit sloppy for my taste. I used a new topstitching needle so the only thing I can figure is that my machine handled the layers of fabric differently. There was some variation — some topstitching was just two layers of cotton. Some was fabric and bias tape. The machine just may not have liked the situations equally. It’s something that bugs me more than I think anyone else will notice. When one part turns out so perfect it’s annoying when the next part doesn’t. 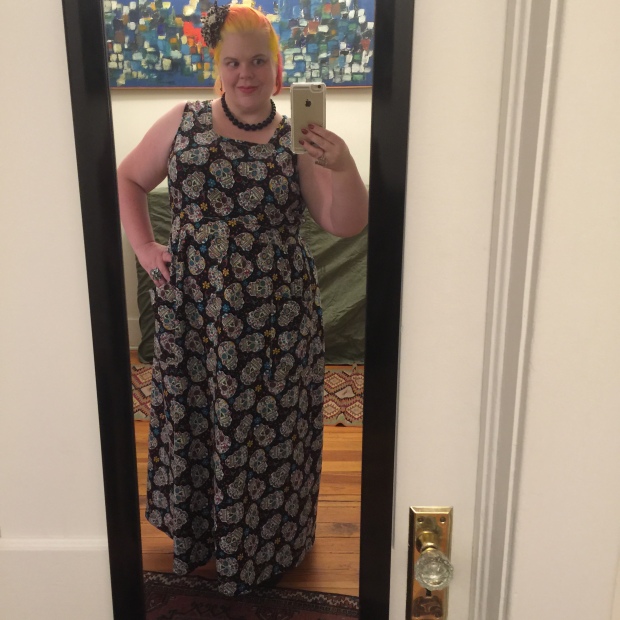 This dress is super comfy to wear, especially when it’s humid and hot. I also wore it flying home from my recent trip to the UK. Beside being sweaty and ill, I still managed to look halfway decent in this dress. I’m already itching to sew another. It went over well at the luau too! 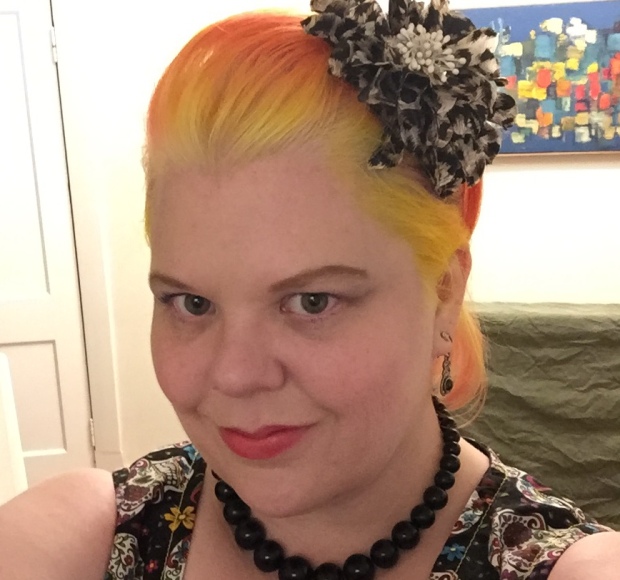 With this make I’ve done four of my five pattern pledges. I still need to make a piece with vintage fabric and I also have more UFOs that need some love. Not bad for halfway through the year!

As much as I want to make another dress from 9562, I need to switch gears back to Regency to get ready for Costume College. I also need to chill out on my new Pokemon Go obsession and stay inside at the sewing machine. Gotta catch and sew them all! 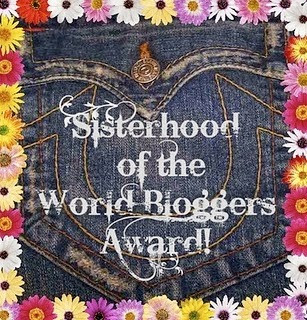